The two pathological hallmarks of Alzheimer’s disease (AD) are plaques, and tangles. The plaques are little clumps of the amyloid-beta protein (Aβ) and the tangles are twisted strands of the tau protein.

These proteins are hypothesized to be the earliest indicators of AD as they can often be found decades before any noticeable cognitive changes have occurred in an Alzheimer’s patient.

Due to recent PET scan technology, the presence of Aβ and tau proteins can now be measured in-vivo.

In collaboration with the StoP-AD Centre we are currently conducting a multimodal longitudinal research project that assesses the presence of Aβ and tau deposits in-vivo. This project focuses on cognitively normal individuals with a family history of AD.

Specific research projects in the lab related to these data include:

In a recent study published in Brain [pubmed, PDF] we analyzed PET images from healthy controls and patients, including both imaging and pathological data, and showed that the statistical thresholds that are generally used in the field to assess amyloid (Aβ) positivity are too high to capture individuals with low but still significant Aβ. In this study we also assessed the pattern of Aβ deposition in the brain (see video below). Dr. Villeneuve received the Human Amyloid Imaging Young Investigator Award as recognition for that work. Press recognition: Alzforum

Video: Voxel-wise analyses showing the pattern of Aβ accumulation in older adults. Each image represent a contrast of 22 subjects with a mean global DVR value > 1 to a reference group (N=22) with a global DVR=1. Significant voxels first appeared when the group mean was DVR=1.07. Threshold at p <.05 after FWE correction, k >150. 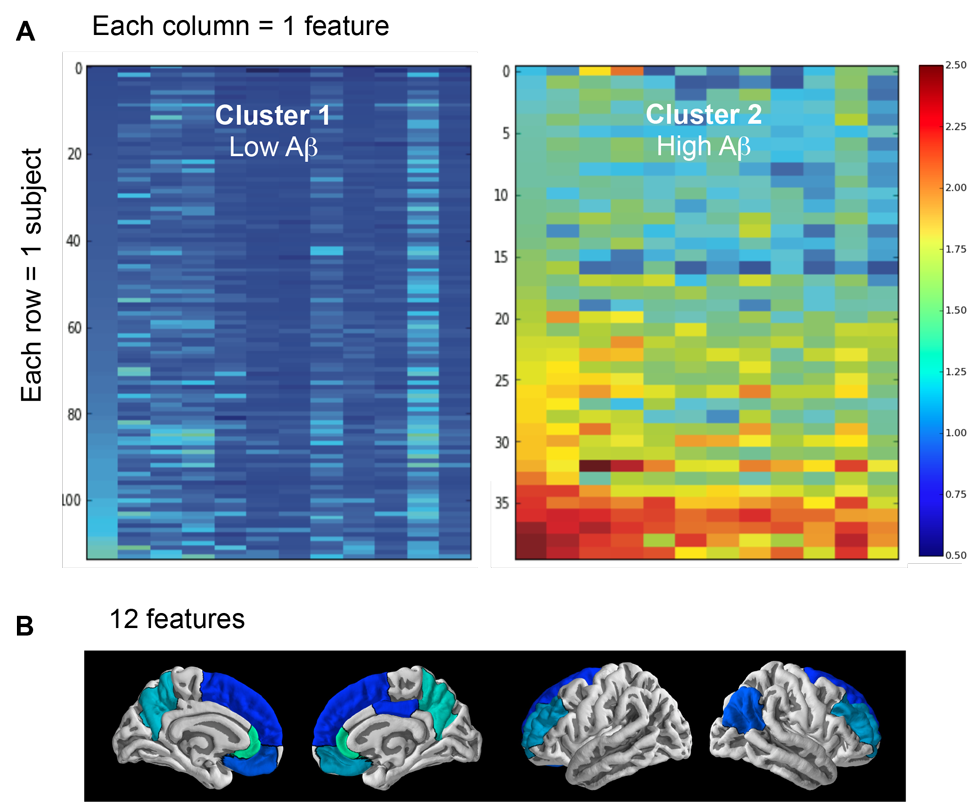 Along with Miranka Wirth and Renaud La Joie we published an opinion paper in Frontiers in Aging Neuroscience [pubmed, PDF]. We discussed the topography of Alzheimer-related brain injury (as observed with MRI or FDG-PET) and proposed that these regions that are highly altered in AD might in fact be the convergence points of multiple pathologies: tau, amyloid, vascular…

Figure: Regional convergence of different pathologies (and their impact) involved in the clinical expression of late-onset Alzheimer’s disease. Solid lines represent pathologies that are needed to develop the clinical onset of Alzheimer’s disease (AD), while the dotted line represent a pathological factor that is not needed but, if present increases the risk of developing AD. The pattern of brain injury associated with tau, Aβ and vascular pathologies is represented by a schematic illustration based on current literature. White dots represent brain regions where at least two pathologies are converging. These white dots also represent brain regions that are typically found to be atrophied and/or hypometabolic in individuals with AD, and when atrophied in cognitively normal older adults they increase the risk of progression to AD.

DISCLAIMER: The documents distributed here have been provided as a means to ensure timely dissemination of scholarly and technical work on a noncommercial basis. Copyright and all rights therein are maintained by the authors or by other copyright holders, notwithstanding that they have offered their works here electronically. It is understood that all persons copying this information will adhere to the terms and constraints invoked by each author’s copyright and or other publishers (as appropriate). These works may not be reposted without the explicit permission of the copyright holder.