Vascular risk factors (e.g. hypertension, dyslipidemia and diabetes) are well known risk factors for Alzheimer’s disease (AD). One pathway by which vascular risk increases the likelihood of dementia is by causing vascular brain injury (VBI) (e.g., white matter lesions and infarcts). The advent of amyloid PET imaging has helped establish that vascular risk factors also lead to AD via pathways that are independent from VBI, at least when VBI are measured as white matter lesions and infarcts. In-vivo studies, for instance, show that increased vascular risk is related to higher Aβ burden, a relationship that has not been found with VBI.

Furthermore, while VBI and Aβ have an additive and independent impact on brain integrity (e.g. atrophy), vascular risk factors have been found to potentiate the impact of Aβ on cortical thickness on brain regions vulnerable to AD. Little is known about the interplay between tau and vascular health.

Along with William Jagust, we published a review article named “Imaging Vascular Disease and Amyloid in the Aging Brain: Implications for Treatment” for The Journal of Prevention of Alzheimer’s Disease [abstract, PDF]. This review first presents a brief overview of knowledge about the association between AD pathology and vascular factors (both VBI and vascular risk factors) from epidemiology and autopsy studies. We subsequently address what has been learned since the advent of in-vivo Aβ imaging (see figure below). Possible avenues for prevention and treatments are also explored along with future research directions 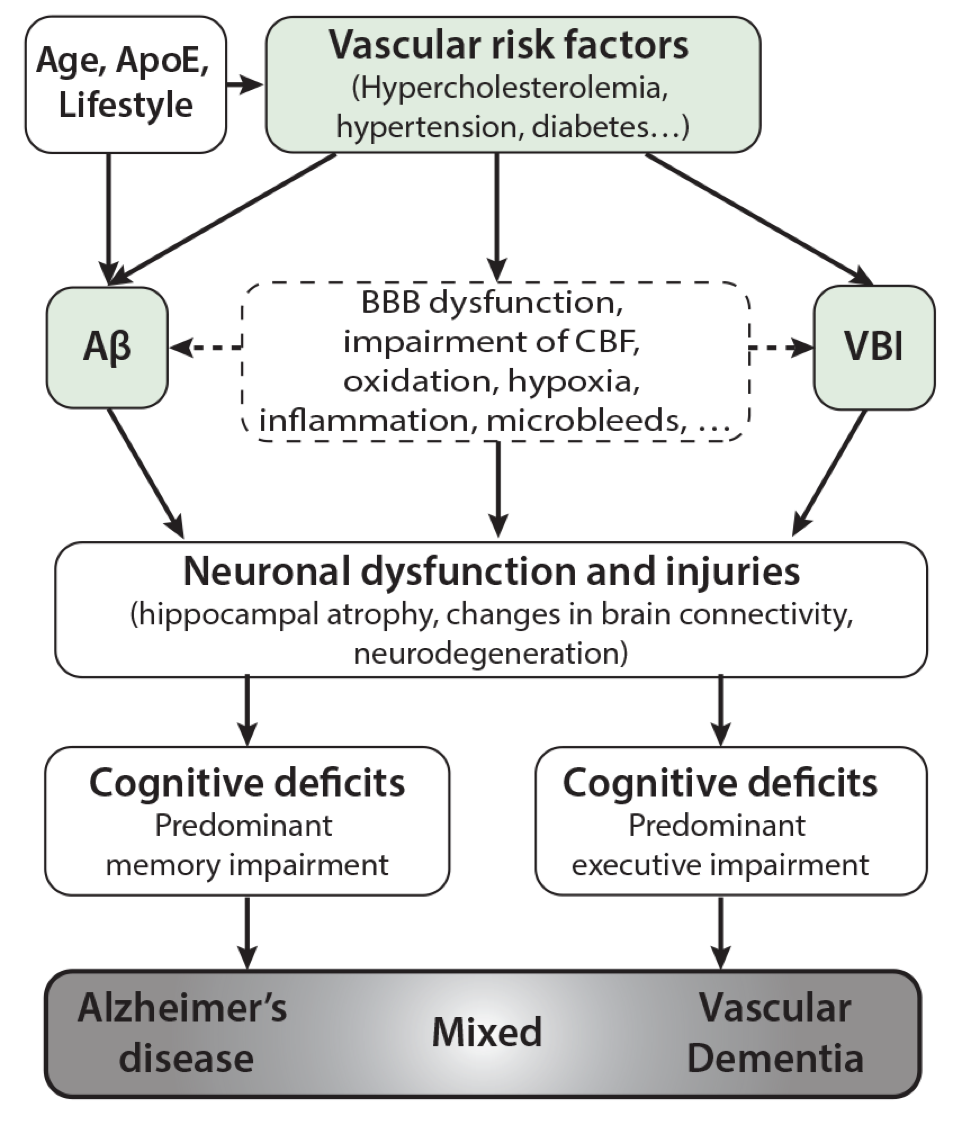 In a study published in Neurology [pubmed, PDF], Dr. Villeneuve presented a study showing that high vascular risk thins the frontotemporal cortex independently of Aβ. These frontotemporal regions are also affected in individuals with Aβ deposition, but the latter show additional thinning in parietal cortices. Aβ and vascular risk were found to interact in posterior (especially in parietal) brain regions, where Aβ has its greatest effect. In this way, the negative effect of Aβ in posterior regions is increased by the presence of vascular risk (or vice versa). These findings give insight concerning the mechanisms whereby vascular risk increases the likelihood of developing Alzheimer disease’s (AD) and supports therapeutic interventions that aim to control vascular risk for the prevention of AD. This study received the Alzheimer’s Association’s award for young scientists in Northern California. Press recognition: Alzforum

Figure: Statistical cortical maps showing the impact of Aβ, vascular risk (FCRP score) and HDL cholesterol on cortical thickness in PIB+, PIB- and all older subjects. Negative associations (represented by cold colors) are presented for and vascular risk while positive associations represented by warm colors are presented for HDL cholesterol. Statistical surface maps were created using a vertex-wise statistical thresholds of p < .05. The analyses are corrected for age, cognitive status and multiple comparisons.

In collaboration with Miranka Wirth, we showed that white matter lesions are associated with atrophy in brain regions vulnerable to Alzheimer disease. This study is published in JAMA Neurology [pubmed]. Press recognition: Alzforum, Psychcongress

With the collaboration of Sylvie Belleville, Serge Gauthier, Fadi Massoud and Christian Bocti we developed an index that computes the most frequent vascular risk factors and diseases. This index allows us to assess the vascular risk profile of older adults. It is easy to use, and was created for clinical and research purposes. The index is now used in several research projects in Montreal [pubmed, PDF, index].

Using the index of vascular burden that we created, we found that the combined effect of multiple vascular risk factors increases executive deficits and strategic memory impairments in persons with mild cognitive impairment (MCI) (Villeneuve et al., Neurobiol Aging, 2012Neuropsychologia, 2011; DGCD, 2009). These papers also helped identify cognitive tasks that are useful to assess MCI prognosis. The paper, published in DGCD, obtained a IA-CIHR award for its impact on research in aging and the paper published in Neuropsychologia obtained a Brain Star CIHR award for its impact on research in mental health.

DISCLAIMER: The documents distributed here have been provided as a means to ensure timely dissemination of scholarly and technical work on a noncommercial basis. Copyright and all rights therein are maintained by the authors or by other copyright holders, notwithstanding that they have offered their works here electronically. It is understood that all persons copying this information will adhere to the terms and constraints invoked by each author’s copyright and or other publishers (as appropriate). These works may not be reposted without the explicit permission of the copyright holder.